The Employment Tribunal has made an interim order on the Firefighters' transitional protections claims hearing. An employer’s circular has been sent to FRAs informing of the detail which is available here.

We understand that stakeholders are keen to hear an update with regards to the effect of the Sargeant and McCloud case for the Firefighters' Pension Scheme. As you will appreciate this is a legal case with ongoing remedy proceedings nevertheless we thought it might be helpful to provide a brief update of how the remedy process in related to the Sargeant and McCloud case will be handled.

As you will know FBU on behalf of their members (known as the claimants) brought a legal challenge against the respective UK Governmental bodies and the Employers, Fire and Rescue Authorities (FRAs) (together known as the respondents) on whether the provisions in the 2015 Fire Pension Scheme which provide protections based on age to remain in the former final salary scheme are age discriminatory (other claims were made but it is the age discrimination claim which is the primary one).

As they were named as respondents in the case, FRAs had to submit a defence to the legal challenge. This defence has been managed collectively on behalf of the UK FRAs by the LGA under the auspices of the National Employers and decisions have been taken by a central steering group made of FRA representatives.

In December 2018 the Court of Appeal found that the transitional protections unlawfully discriminated on age and the case has therefore returned to the employment tribunal for it to determine remedy. A case management hearing in the remedy proceedings will be held on 18 December 2019.

Nominated contacts at each FRA have been kept informed as to the progress of the case and decisions made by the steering group.

Not all Fire Pension Schemes (FPS) members are claimants under the case bought by FBU and therefore these members are known as non-claimants. The Government will need to address age-based differences in treatment for those non-claimants across all the FPSs through consultation and changes to scheme rules to ensure that for non-claimants there is no unlawful treatment on the basis of age. The Home Office have recently informed us that it is their intention to do this through consultation with the Firefighters' Pension Scheme Advisory Board England and it is expected that this will progress alongside the employment tribunal remedy process in the Sargeant case.

In order for the Scheme Advisory Board (SAB) to respond to this consultation it is expected they will form a working group of stakeholders to advise them, this will be drawn from existing SAB committee members and other stakeholders. We expect that working group to be formed after the next board meeting on 9 January 2020.

Attention is required this month for the ABS 2019 survey. There are different versions for FRAs and administrators to complete, and we invite one reply from each FRA and one per FRA from administrators. The deadline is 10 January 2020.

We have issued a number of useful resources this month, including a factsheet on TPR’s six key processes and updated informal guidance on data scoring ahead of the 2019 scheme return. The eligibility to join factsheet has been updated, and a version for Wales added.

Items of interest to finance colleagues include guidance on forecasting for the top-up grant and information about the Fire Finance Network.

For feedback or suggestions for content, please email This email address is being protected from spambots. You need JavaScript enabled to view it.

There are a number of important updates in this month’s edition, including confirmation of the new contractor to provide the Board of Medical Referees (BMR) to consider medical appeals and a reminder to provide up to date contact details for HMRC.

We have also published a research report into our training provision, which will be used to inform our training plan for 2020. Watch this space!

This month we are delighted to release the final report in the review of scheme administration costs and effectiveness. The report, commissioned by the SAB, has been prepared by Aon and you can read the full findings here Appendix 1. Firefighters Admin Benchmark report - Final - Issued. We would like to thank all those who participated in the surveys and publicised the member questionnaire.

There are a number of other important updates in the August edition, including an update on data that was excluded by GAD for the purposes of setting the 2016 valuation assumptions and a timely reminder about the recording and reporting of breaches of the law.

FPS Bulletin 22 - July 2019 has been published. To celebrate the second anniversary of the bulletins, we’re pleased to bring you a very special “take-over” edition, with articles on various topics from pensions tax to cyber-crime, and almost everything in between. Thank you to those organisations and individuals who have contributed.

You will also find our usual updates on FPS and across the wider landscape.

As detailed in FPS Bulletin 20 – May 2019, the outcome of the Government’s application for permission to appeal to the Supreme Court was expected in July. This decision has been made earlier than expected and on 27 June 2019 the Supreme Court has denied the Government’s request for an appeal in the transitional protections case in respect of age discrimination and pension protection.

We are aware that members may have a number of questions around the on-going legal challenge to the transitional provisions of FPS 2015. While we have covered this in-depth for FRAs in previous bulletins , we are preparing a briefing note covering the full background to the case and each stage of the challenge, which can be shared with members. The note will be published as soon as possible.

Until the remedy has been determined by the employment tribunal and any regulations changed as a result, we cannot speculate how future benefits may change. Therefore any retirement projections, Annual Benefit Statements as at 31 March 2019, or pensions advice must be based on the regulations as they currently stand.

FPS Bulletin 20 - May 2019 has been published. There are a number of important items in this month’s edition, including guidance on pensionable pay which contains actions for FRAs to consider.

We are also seeking your views on the FPS training provision and would be grateful if you could take this short, 10 minute survey https://www.surveymonkey.co.uk/r/FPS_training_survey. The link will stay open for one month until the next bulletin.

FPS Bulletin 19 - April 2019 has been published. The bulletin contains a number of important updates and some items require action. Articles covering the exit cap consultation and our research report on the 2018 ABS survey may be of particular interest.

Find out about new factsheets we have issued and catch up with all our usual features.

On 28 February 2019, GAD published the final reports in relation to the 2016 valuation, including the scheme specific employer contribution rates that will apply for the implementation period April 2019 to March 2023.

The full suite of reports can be accessed on the new dedicated valuation page of this site.

On 30 January 2019, HM Treasury issued a written ministerial statement with regards to the effect of the recent judgments on the McCloud and Sargeant cases on the valuation.

As a result of this announcement, the cost cap rectification process for the Firefighter Pension Scheme will be suspended, pending the outcome to the Government’s appeal.

HM Treasury has also advised that the employer rate that Fire and Rescue Authorities pay towards firefighter pensions should be increased as of 1 April 2019. Following this announcement GAD are able to calculate the individual employer contribution rate for the four firefighter schemes which we will confirm these rates as soon as possible.

There will be no changes to firefighter pension schemes member’s contribution rate or the accrual rate at this stage. There will also be no change to the member contribution banding rates, therefore administrators should continue to use the bands that came into effect April 2018.

The Scheme Advisory Board in partnership with Aon has launched the member survey for the FPS benchmarking exercise with a deadline of 28 February 2019. More information about the project can be found here.

We are interested to hear from all member stakeholders, whether they be active, deferred, pensioners or dependents. The survey can be completed at the following link http://bit.ly/FPS-Memb-Survey and should take around 5 minutes to complete. All responses are anonymous. 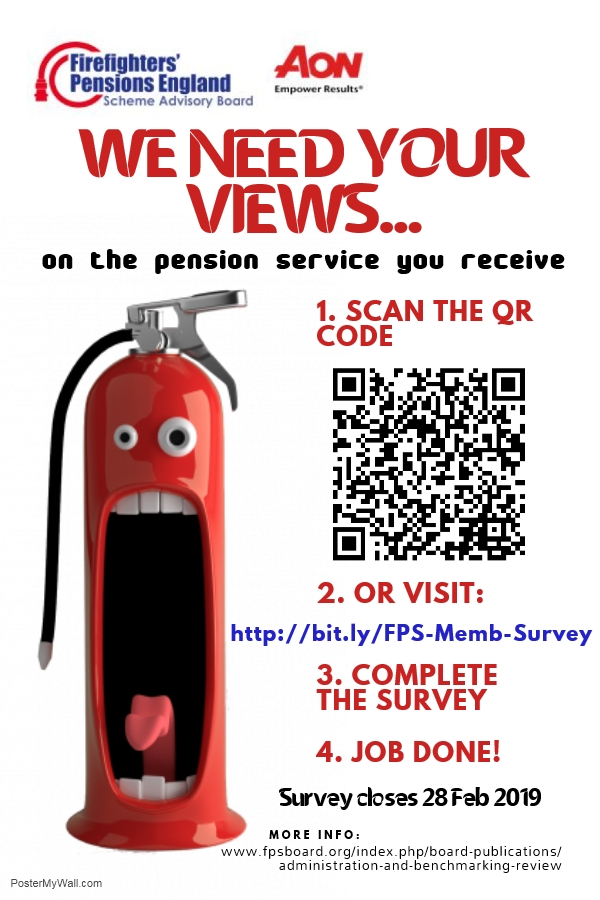 The data will be collected by Aon to feed into a report to benchmark the standard of service across the Firefighters’ Pension Scheme in England.

Further to the letter issued by the Home Office on 31 October regarding the review of scheme factors due to the change to the SCAPE discount rate, GAD has provided replacement factor tables to update the Added Years/Added Pension and CPD factors for the Firefighters’ Pension Scheme (England) with immediate effect.

These factors replace those currently in use.